Left unchecked, the number of solvers would grow exponentially to include the various combinations of models required by OpenFOAM’s users. Thankfully the OpenFOAM core maintenance team at CFD Direct consolidates solvers to prevent this. For example, during maintenance work on the surface film functionality, the team implemented film calculations within an fvOption named VoFSurfaceFilm which could be used in simulations running compressibleInterFoam. This meant compressibleInterFilmFoam, a duplicate solver with additional film modelling introduced in OpenFOAM v5, could be removed. The team then wondered whether they could create fvOptions for other models to remove more solvers.

Redesign of Models and Constraints

fvOptions were introduced in OpenFOAM v2.2 in 2013 “for any physics that can be represented as sources or constraints on the governing equations.” Their purpose from the outset was to manipulate equations in the solvers in two ways: 1) providing source terms to equations in the solver; and, 2) applying constraints to the solution of an equation. The API (application programming interface) was not designed for large models and it was bloated because the functions applying the constraints did not do anything for source fvOptions, and vice versa.

Therefore in March 2021, the team at CFD Direct introduced fvModels and fvConstraints as a “rational separation of fvOptions between physical modelling and numerical constraints”. The naming of fvModel reflected the ambition to support models which involve complex calculations and their interaction with the main solver, rather than simply source terms.

One clear distinction between fvModels and fvConstraints relates to “state”, i.e. stored model data such as fields, coefficients, etc. fvModels holds internal state which evolves by either calculating algebraic expressions and/or solving additional transport equations, and through interaction with the solver. The interface in the solver (example, right) provides the correct()function to evolve state and source()to influence the governing equations, e.g. momentum conservation.

fvConstraints do not hold an evolving internal state but instead simply apply constraints to the solution of equations. The constrain()function applies the constraints both to the matrix equation (UEqn) prior to solution and then afterwards to the solved field (U). 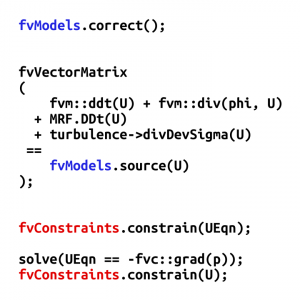 The new design encouraged the development of some new fvModels. They include heatTransfer and heatSource which provide source terms for heat transfer to an ambient temperature and heat as a total power or power per unit volume, respectively. These fvModels target common use cases directly and are easier to configure than a generic source fvOption. Similarly, a new limitPressure fvConstraint replaces the optional pressure limiting previously built into solvers. This is more consistent with constraints on other fields, e.g. limitVelocity and limitTemperature, which is more readily extensible to other fields.

An additional hydrostaticInitialisation switch to initialise hydrostatic pressure was required to deprecate fireFoam. The general solvers include new models, thermophysics and flow switches to allow users to deactivate those components of a simulation. This approach to solver design, with optional models and switches, is consistent with our OpenFOAM Training which builds CFD competency by designing solutions in small steps from prototype to production and packaging.

… to enable the work needed to make OpenFOAM progress.