Support for C5 and C5n Instances

C5n instances can be clustered for HPC, delivering 70%-90% scaling at 504 cores.  This performance is significantly better than standard C5 instances, which exhibit scaling below 50% for the same number of cores.  Even with the higher price of ~25%,  C5n instances are more cost-effective than C5 when clustering multiple instances.

The standard C5 instances now include some newer custom 2nd generation Intel Xeon (Cascade Lake) processors with an higher clock speed than the previous processors.  The new processors contain more cores, so new instance sizes of c5.12xlarge and c5.24xlarge have been introduced, containing 24 and 48 cores respectively.  (If the user selects one of these new sizes, they are guaranteed the new hardware.)  For single instance use, we recommend the standard C5 instances.

In November 2018, AWS announced Elastic Fabric Adapter (EFA), a network interface for HPC applications running on EC2.  We previewed the EFA technology, which showed ~70% scaling at 1008 cores for meshes of 100 k cells per core and linear scaling at 1008 cores for a fixed mesh size of 97 m cells.  EFA is now publicly available and CFDDFC v7.0 supports EFA, but currently only in the us-east-1, us-east-2, us-west-1and eu-west-1 regions. 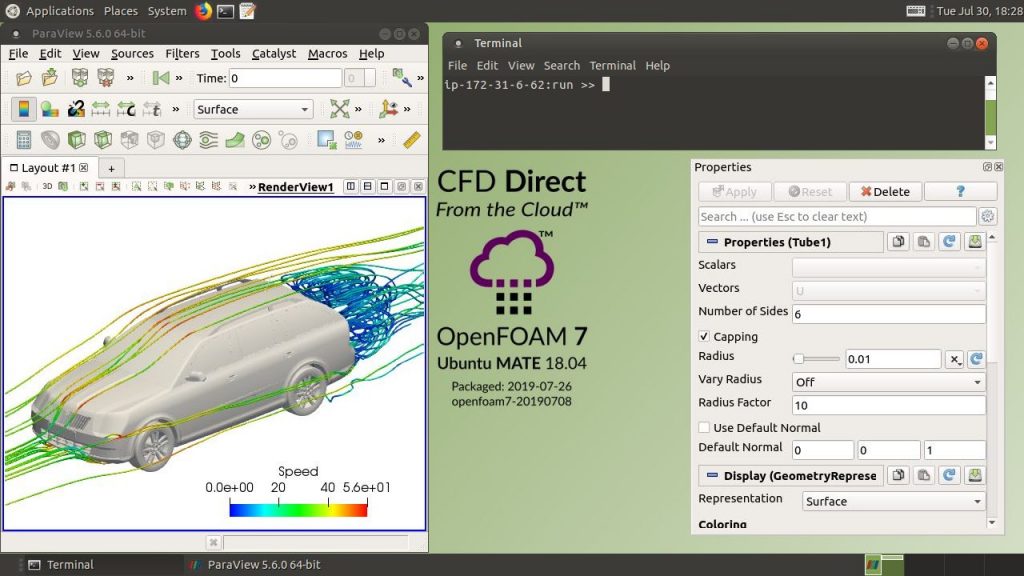 The cfddfc command line interface (CLI) manages instances of CFDDFC on AWS, transfers data to and from instances and runs provides convenient access to the instance by remote desktop (see above).  It now includes a new cluster sub-command to launch a cluster of instances.  The user first launches a master instance, e.g. c5n.18xlarge, that includes the required storage for the entire cluster, e.g. 300 GB:

The user then creates a cluster by adding a specified number, e.g. 2, of slave instances of the same instance type, e.g.:

This would create a cluster of 3 × 36 = 108 cores.  The launch command includes an -efa option to attach the EFA to instances.

The cfddfc CLI now includes a cost sub-command to report all costs associated with running CFDDFC.  It requires a short configuration through the AWS console, which is described by the instructions provided by the following command:

Once configured, the user can report previous costs by running: