CFD Direct From the Cloud™ (CFDDFC) is a Marketplace Product for AWS EC2, that provides a complete platform with OpenFOAM and supporting software running on the latest long-term support (LTS) version of Ubuntu Linux.  It includes the CFDDFC command line interface (CLI) to enable simple management of CFDDFC instances, data transfer and running of OpenFOAM applications.  CFDDFC is enabled for the ENA, so can extract optimal network performance from the C5 series of instances.

Cluster of C5n Instances with CFDDFC

We launched clusters of C5n instances to test parallel scalability.  Our CFDDFC CLI provides an easy and convenient way to launch a cluster.  First, the master instance was launched with the c5n.18xlarge instance type and 200 GB of storage by the following command, using eu-west-1 as the default region:

Once the master instance launched, the cluster was created by launching slave instances of the same type.  For example, the following command adds 6 slave instances to create a cluster of (1 + 6) × 36 = 252 cores:

We tested parallel scaling of C5n instances on 2 cases:

We ran a series of simulations on these 2 cases with meshes of different numbers of cells, M, on clusters with different numbers of cores, C.  The clock time, T, and simulated time, t, were recorded using the time function object.  We calculated a performance factor F = (t /T )⋅(M /C ), which was normalised against F for a single instance (36 cores) and presented as a percentage.  On that basis, 100% denotes “linear scaling”, with super- and sub-linear scaling represented by percentages above and below 100, respectively.

External Aerodynamics around a Car

The configuration of the external aerodynamics was very similar to that described in cost of CFD in the cloud.  The number of cells was increased to approximately 97 million (97 m); at a cluster size of 500 cores, there are then 200 thousand (200 k) cells per core.  The solution converged in 2500 iterations to a mean drag coefficient of 0.325 (see below).

We ran simulations on a single instance and clusters of 2, 4, 7 and 14 instances using all available physical cores. The graph below shows a departure from linear (100%) scaling at around 200 cores, with 90% scaling maintained at 504 cores. 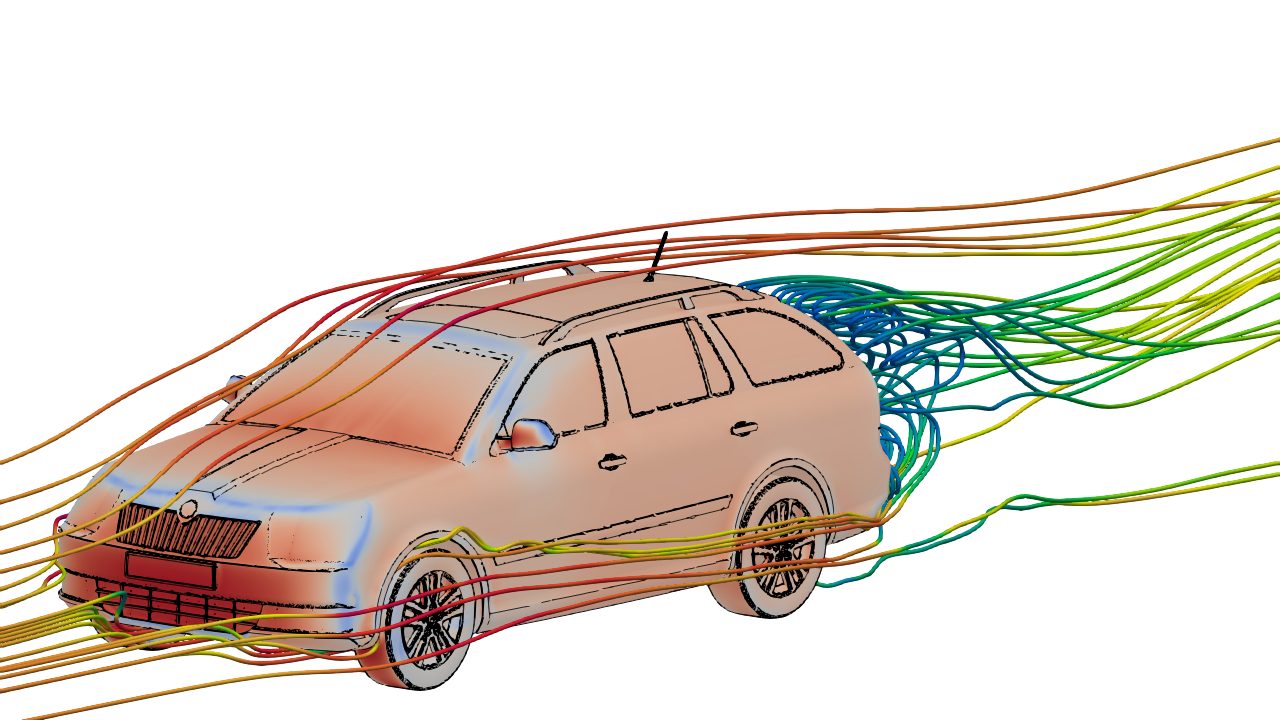 Flow over a Weir with Hydraulic Jump

We configured the simulation of flow over a weir with a fixed 100,000 cells per core (weak scaling).  The weir was 30 m high, with an ogee profile common in some dam spillways (comparable in size to the Burdekin Dam).  A preliminary mesh was created with the weir profile using snappyHexMesh.  The final mesh was then generated by extruding a 2D flattened patch to a width of 150 m in the case of a single instance.  On cluster configurations, we increased the weir width proportionally with the number of instances to maintain the same total cells per core, for the same cell size.  The water flow rate was 21.6 kL per m width. (L = litre) 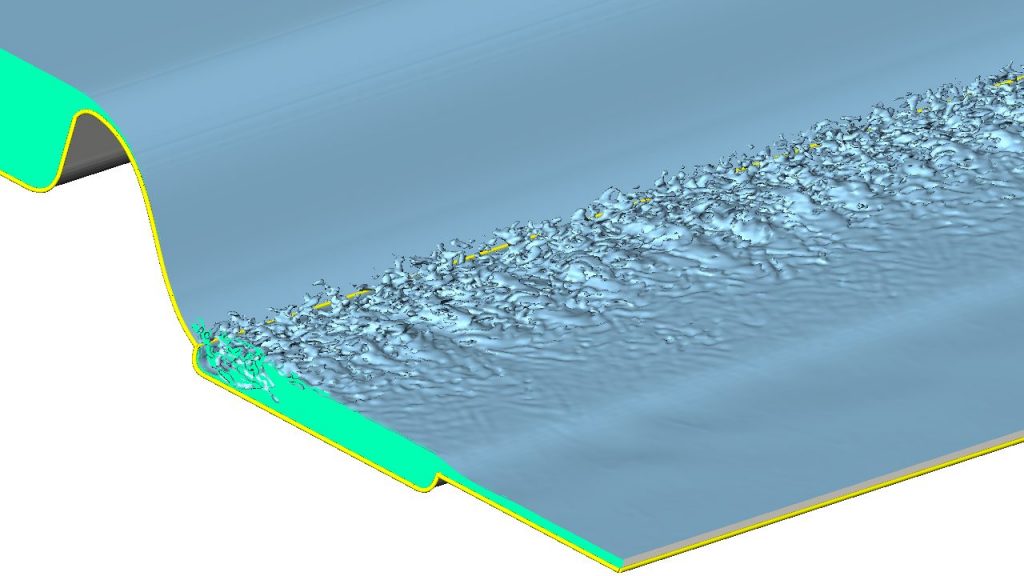 All simulations were run to t = 200 s to allow a pronounced hydraulic jump to form.  The cases ran with a variable time step Δt corresponding to a maximum Courant number Co = 2 and simulations ran for approximately 10,000 steps with an average Δt ≈ 0.02 s.  Iso-surface and slice data was written at intervals of 0.5 s, producing 400 frames for animation.  Simulations ran on clusters of 2, 4, 7 and 14 instances, with the animation below taken from the largest cluster of 504 cores, with a mesh of 50.4 m cells, a weir width of 2.1 km and 45 ML flow rate.

We have previously described the cost of CFD in the cloud with CFDDFC running on Amazon EC2.  CFDDFC runs by default on spot instances to take advantage of cheaper pricing on unused EC2 capacity.  It notifies users of the charges for transferring data from EC2 instances.  CFDDFC is charged as an hourly software fee at rates listed on the product page on AWS.  The following table shows the cost of EC2 instances and CFDDFC software for the benchmark simulations with 504 cores, including indicative costs for data transfer from EC2, but ignoring the much smaller cost of Amazon Elastic Block Storage used by the EC2 instance.  Costs are as of March 2019 in the eu-west-1 region, rounded up to the nearest $1.