In November 2018, AWS announced Elastic Fabric Adapter (EFA), a network interface for HPC applications running on EC2.  During the preview of the EFA technology, we ran the benchmark OpenFOAM simulations presented previously:

The simulations used all available physical cores on a single c5n.18xlarge instance and on clusters of 4, 7, 14 and 28 instances.  The c5n.18xlarge contains 36 physical cores, so that the largest cluster contained 28 × 36 = 1008 cores.  For each simulation, we calculated a performance factor F = (t /T )⋅(M /C ), where: t = simulated time;  T = clock time; M = number of cells; C = number of cores.  F is normalised by its value calculated for a single instance (36 cores) and presented as a percentage.  On that basis, 100% denotes “linear scaling”, with super- and sub-linear scaling represented by percentages above and below 100, respectively.

External Aerodynamics around a Car

The simulation of external aerodynamics of a car was run as described previously.  The scaling graph below shows super-linear performance for the cluster configurations until, at 1008 cores, the scaling returns to linear (98.4% precisely).  These strong scaling tests conflate the effects of network performance with other factors, such as CPU cache.  As the number of cells per core decreases, the CPU can cache a greater proportion of the data structures in CFD, e.g. fields, matrices, etc, leading to super-linear scaling.  At the same time, as the number of cells per core decreases with increasing cores, there is greater sub-linear scaling associated with network performance.  Around 1000 cores and approximately 100 k cells per core, the two effects “cancel out” to deliver net linear scaling. 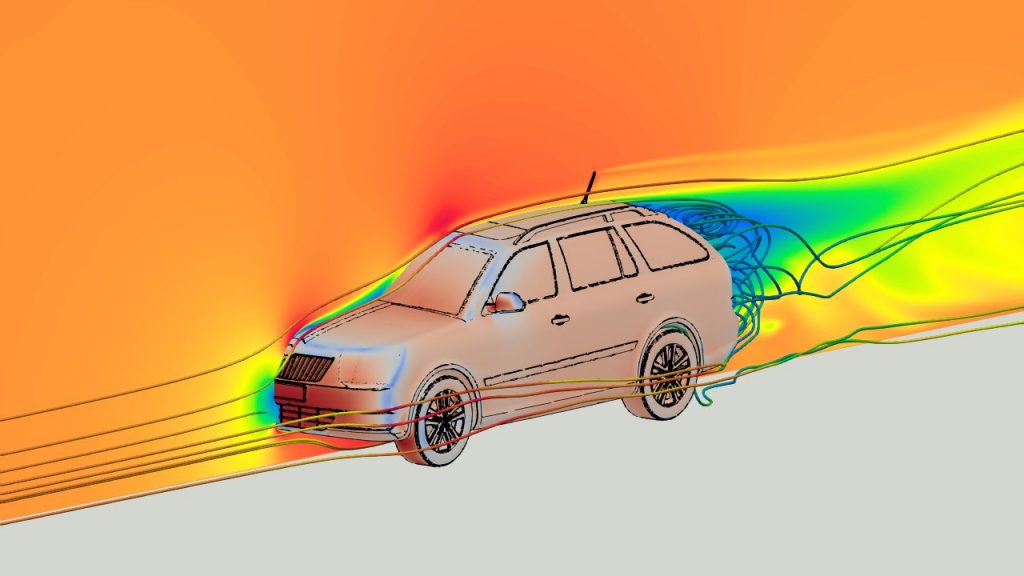 Flow over a Weir with Hydraulic Jump

The simulation of flow over a weir, with hydraulic jump, was run as described previously.  The weak scaling tests isolates the effect of network performance which shows sub-linear scaling down to 67% at 1008 cores (see below).  The simulations ran with a fixed time step of 0.01 s, writing data every 50 time steps across the network to a file system on the main instance.  As before, we repeated the simulations with data writing switched off, which increased the scaling to 72.6% at 1008 cores. 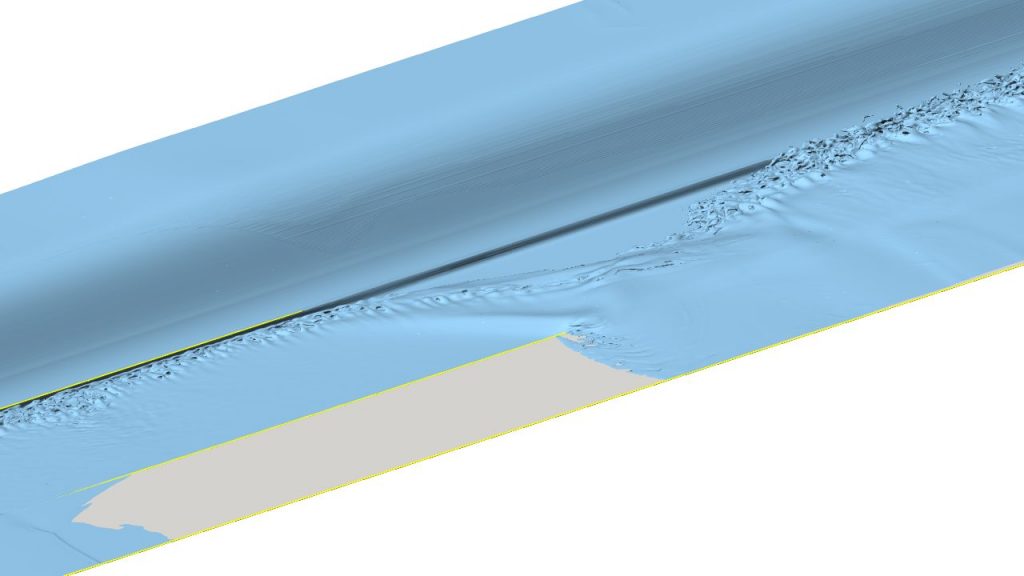 The simulation on 1008 cores has a weir width of 4.2 km (and mesh size of 100 m cells).  The image above shows a region of flow where the hydraulic jump at the base of the weir was no longer perpendicular to the flow direction.  This phenomenon could cause an increase in solution time due to the change in flow physics, although it is unlikely to be particularly significant.

The work was supported by the AWS Cloud Credits for Research program.