During our first year we made over 900 code commits to the public development line of OpenFOAM (OpenFOAM-dev) which became OpenFOAM v3.0.0, a major new version produced primarily by us, with a notable contribution from blueCAPE and further contributions credited to 8 other individuals. We produced a minor version update, OpenFOAM v2.4.0, and a patch release, OpenFOAM v3.0.1, which originated from the bug fix line of OpenFOAM 3.0 (OpenFOAM-3.0.x), to which we also made over 500 code commits. We contributed approximately 1200 man-hours of new developments, of which approximately 50% was funded by customer projects, leaving 600 man-hours unpaid. 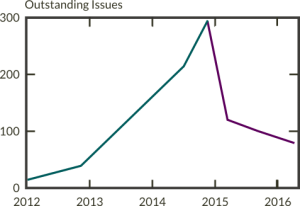 are submitted by users through the OpenFOAM issue tracking system, and fixes are committed to the public code repositories when agreed by contributors from the community. The history of outstanding issues are plotted for the past 4 years in the adjacent graph. After a period of poor maintenance between 2013 and 2014, the rapid reduction in issues (indicated by the purple line) was primarily due to the work of Weller following his departure from ESI-OpenCFD. During the past year, the outstanding issues has continued to fall, by approximately 35%, with CFD Direct contributing approximately 400 unpaid man-hours and other community members, particularly blueCAPE, providing welcome contributions.

OpenFOAM is owned by the OpenFOAM Foundation, the organisation set up to ensure OpenFOAM is free software. As Directors of the OpenFOAM Foundation, Greenshields and Weller contributed approximately 200 unpaid man-hours to the Foundation, including creation of the Contributor Agreement, website maintenance, code releases, processing enquiries from users, promoting OpenFOAM at user meetings, etc. Jenya Collings managed all business administration for the Foundation, including processing the Agreements of new contributors including, among others, VTT Technical Research Centre of Finland Ltd, FM Global and Intel.

Our mission is to make CFD inclusive and accessible. To this end, we set up a free OpenFOAM documentation resource on our website, writing a new OpenFOAM Linux Guide and articles on Tensor Mathematics and the Energy Equation in OpenFOAM. We published the OpenFOAM User Guide on our site, maintaining and updating it, e.g. with a new section on Transport/Rheology, extension of Thermophysical Models, etc.

Where is the Source Code? is our campaign for Promoting Free, Public Distribution of #OpenFOAM, #WhereIsTheSourceCodehttp://t.co/s2nMc3mOkf

We keep OpenFOAM users updated about new features, maintenance, tools and example cases through social media, primarily CFDdirect@Twitter. In our first year, we posted over 200 messages, with the OpenFOAM community expressing strong support for our work through a high number of likes and re-tweets. Community support is particularly strong for our campaigns promoting free software, in particular our campaign for free, public distribution of Where is the Source Code? (see above). Many of this community have taken the further step of signing the OpenFOAM Contributor Agreement to become contributors to Free Software. This additional work for users the community constituted a further 100 hours of unpaid work, approximately.  In total, CFD Direct contributed approximately 1300 hours of unpaid work to the OpenFOAM project.